A few of my friends asked for my Award-Winning Chili Recipe. (In this case, “Award-Winning” means “was judged slightly better than two of my co-workers’ chili.) So, here you go. Makes approximately a whole lot of chili. END_OF_DOCUMENT_TOKEN_TO_BE_REPLACED

“Don’t be upset by the results you didn’t get from the work you didn’t do.” – Joel Runyon

One of my favorite things to read is the ImpossibleHQ Blog. The writer, Joel Runyon, is one of those guys with an outstanding perspective. One of his mantras is that “if you want to change your life, you have to change your life.” Do you want to lose weight? There is no magic pill. Would you like to visit another country? There is no Star Trek transporter beam. Feel a desire to be better at your job or get promoted? There’s not a shot that will do that for you.

You and you alone have to make the decisions and sacrifices and effort to make these things happen.

Take control of your own destiny.

Have a great day!

I remember it like it was yesterday. The Appalachian State Mountaineers had not suffered a home loss in 30 straight games. Then on October 20, 2007, six weeks after we had defeated Michigan in the Big House, the Georgia Southern Eagles came to The Rock and walked out with a 38-35 victory.

I was mad. The trash can I kicked on the way out of the stadium had done nothing to me, but I felt it should be punished for its part in our undoing. My friends and I spent our walk back to the car loudly blaming our players, the refs, our coaches, the band, the hot dog vendors…anyone involved with the program.

END_OF_DOCUMENT_TOKEN_TO_BE_REPLACED

I wrote this a few days after Jim passed away. It’s been a year since he left us.  I didn’t really have a title for this. Probably makes more sense just to call it “Jim.” My heart still breaks when I remember him. At some point I hope to be face to face with the guy who came up with cancer. I have a couple choice words and tough questions for him. Until then…

“A life is not important except in the impact it has on other lives.” – – Jackie Robinson

When Sonja and her aunts say his name, you not just hear, you feel the reverence in their voices. He was more than a mere mortal man to them. Even though they lovingly refer to Jim as one of the girls, they’re kidding; he was anything but. He was a man’s man. He rebuilt and rode motorcycles. He smoked cigars. He fixed things. He worked hard to provide for his family.

The “one of the girls” moniker was because he would rather hang out with his beautiful wife than watch a football game. He acted as if he was forced, kicking and screaming, to the car for day long shopping trips. He jokingly complained about them afterwards. But, his mischievous grin betrayed him. He loved the time spent with the Fields women. And they doted on him.

END_OF_DOCUMENT_TOKEN_TO_BE_REPLACED

After winning the Appetizer Contest at a New Year’s Party we attended I was asked for the recipe.  Here you go. I’m a little embarrassed by how easy it is. The dipping sauce only has three ingredients, but tastes like you spent some time on it. Enjoy.

END_OF_DOCUMENT_TOKEN_TO_BE_REPLACED

My buddy asked me to take a look at his Dad’s obituary before he submitted it to the paper. He wanted to know if there was anything he left out. Reading it I became painfully aware of how difficult it is to reduce someone’s life to 1100 characters that will fit in a 6 inch column. “He served his country during the Vietnam conflict while in the US Army.” Do you know how much that sentence omits? I’ve seen pictures and heard stories that let me know those few words could be expanded into a book. END_OF_DOCUMENT_TOKEN_TO_BE_REPLACED

We were tired of hanging out with cheerleaders. That’s how spoiled we were. We were in San Antonio. We had just won the Universal Cheerleaders Association’s National Championship. We, in the sense that I was the App State mascot, Yosef, so I got to travel with the team. I like to think my being there as moral support was key in the triumph.

For almost a week we had been in this incredible place, surrounded by the beautiful people. And we won our division. There was a trophy and everything. Afterwards there was a huge party with hundreds of cheerleaders and college dance team girls. But, we’d been hanging out with them for days. We wanted to see Texas. We wanted to move to greener grass. Again, we were spoiled.

So, Lee, “Skee”, and I left the celebration, hopped into a cab, and Lee instructed the cab driver, “take us to a real Texas bar.” (Note: I can’t remember Skee’s real name…or why we called him Skee…but, I bet it’s an awesome story.) END_OF_DOCUMENT_TOKEN_TO_BE_REPLACED

You just got through crushing candy. You did some fine crushing. The candy didn’t stand a chance. Then you pulled up your favorite news site and saw something that evoked shock and awe. A voice in your head screamed “I MUST SHARE THIS WITH THE WORLD!” First, please take a step back. Better yet, sit down. I have something to share with you that may sting a bit. Ready? Sitting down?

We all have access to the same interwebs. Not kidding. Let that sink in for a sec.

You know in your heart that you are the first person to discover on Yahoo News that a celebrity died or a rich English baby had his picture made (didn’t we win a war so that we couldn’t have to give a flying crumpet about that family?), or a natural disaster happened. Sorry. You aren’t. “But, Mike D,” you say, “No one has shared this yet.” Good eye. And don’t worry. The posts are coming. There are a lot of people who feel they must share every “newsworthy” event they discover online with their friends. Take pride that you have at least a few virtual friends who understand they don’t. And weep for those who get their news from social media. END_OF_DOCUMENT_TOKEN_TO_BE_REPLACED

If Mike D Ruled the World there would be a lot more recycling. Not cans and bottles and such, but the recycling of things I’ve previously written. Because, and I’m just guessing here, running the world would be very time consuming.

Yesterday at work I received an email that made me remember this. And since it’s Father’s Day, I thought I would re-share. Originally posted to The FaceBooks on Father’s Day, 2012

I’ve learned a lot from my father. Recently, I realized that one of the many things gained from being the eldest son of The Reverend John Earl Davis, Jr. is the skill of talking behind people’s backs. Don’t get me wrong. I’m not talking about idle gossip; I’m referring to the art of saying things about people when they are not around. 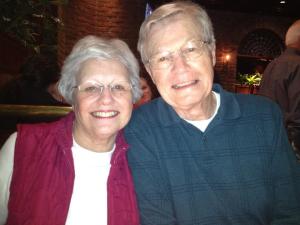 Related to the idle gossip, if you’re going to talk about people, Dad taught me that you don’t say anything about them that you wouldn’t say to them. Fortunately, I also inherited my father’s grin and comedic timing. I learned that with the right delivery you can look at someone and say, “you’re a chucklehead.” Then punctuate with a cheesy grin. The person might actually respond, “you know, I am kind of a chucklehead.”

But, that is not the “behind the back talking about” that caused my epiphany. A few of us were discussing one of my friends who wasn’t present, and I was saying some pretty nice things…really selling him, and I thought, “you know, these are things I’ve never said to this person” (I generally prefer to ridicule those I love when they are around).

END_OF_DOCUMENT_TOKEN_TO_BE_REPLACED 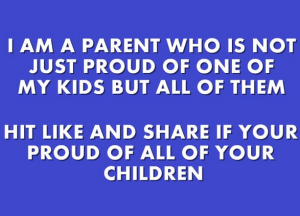 If you see something on The FB that says “like and share this if” there is one socially acceptable option: don’t. Why? First of all, because you are clogging up everyone’s feed with unoriginal content. We all joined this social network so that we could keep up with how many cups of coffee you had or to find out whether or not your kid pooped today. We really don’t give a crap about the other stuff. Secondly, (secondly?…did I just type “secondly”?…I really need a thesaurus) if you have to tell your child you love them by sharing a post that says “if you have a daughter you love, share this” then you should probably spend more time with your kid and less on the computer.