I wrote this a few days after Jim passed away. It’s been a year since he left us.  I didn’t really have a title for this. Probably makes more sense just to call it “Jim.” My heart still breaks when I remember him. At some point I hope to be face to face with the guy who came up with cancer. I have a couple choice words and tough questions for him. Until then…

“A life is not important except in the impact it has on other lives.” – – Jackie Robinson 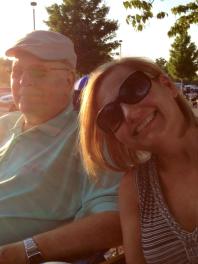 When Sonja and her aunts say his name, you not just hear, you feel the reverence in their voices. He was more than a mere mortal man to them. Even though they lovingly refer to Jim as one of the girls, they’re kidding; he was anything but. He was a man’s man. He rebuilt and rode motorcycles. He smoked cigars. He fixed things. He worked hard to provide for his family.

The “one of the girls” moniker was because he would rather hang out with his beautiful wife than watch a football game. He acted as if he was forced, kicking and screaming, to the car for day long shopping trips. He jokingly complained about them afterwards. But, his mischievous grin betrayed him. He loved the time spent with the Fields women. And they doted on him.

But, occasionally, he jumped out the escape hatch. I remember when he introduced me to his “no women allowed zone,” the building behind his house. A masculine retreat filled with speakers, amps, tools, musical instruments, and memories. A happy place where songs were played in solitude, cigars were enjoyed, and shopping was not discussed. I pointed out to him that there wasn’t much room in the little building for company. He looked at me with a smile that read “now, you get it.”

Hindsight can be mean. I find myself wishing I had spent more time with Jim sharing stories. I learned a lot about him from the anecdotes Sonja shares and from my own observations. We talked about his family and his job. He would ask me about my role at work. But I wish I had asked him more questions.

From Sonja’s stories I figured out the reason for the reverence in her family’s voices when they speak of him. He was always there. The word “patriarch” has different connotations. In Jim’s case it meant that if a family member needed him, he was there. When his wife, his children, his step-children, his sisters-in-law, or his friends had problems he would fix them. That’s what men like Jim do. They fix things. 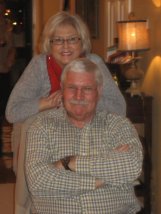 I’ve never paid much attention to others’ father/son relationships. I figure they are none of my business. But, sometimes Hallmark moments happen that one can’t help but notice. Last summer at the beach I witnessed one of those occurrences.

On the back deck of the condo. Father and son, each with guitar in hand. Cigar smoke fighting the breeze in an effort to reach the deck above us. Cold beers fresh from the cooler beside them. Playing together and softly humming as the sun slowly immersed itself in the crashing waves. Smiling the same smile. Both of them keenly aware this may be their last beach trip together. The magic of that moment blocking out that possibility, if only for an instant. Even more special was this moment was repeated time and time again that week. I don’t think either one of them made it down to the beach that trip. They stayed on the patio, played their guitars, and loved each other.

A few months later, my heart broke. The night is chiseled into my memory. Sonja was on the couch crying. The doctors had thrown in the towel. There was nothing more they could do. Cancer had won. My father has preached a lot of sermons about prayer. In one he said, “God answers all prayers but, sometimes the answer is not the one we’re seeking.” I had been praying for so hard for a miracle. A piece of me died when I added, “But, if you aren’t going to heal him, please ease his and his family’s suffering.”

Since that night I’ve been thinking a lot about life. Why are we here? Seriously, what is the point of all this? Is the goal to make it to golden paved roads to cruise on our motorcycles? If so, then what the heck is the meaning of all this stuff between birth and last ride? As I silently scream these questions so loud that my head aches as much as my heart, I keep receiving the same answer:

We’re here to have a positive effect on the lives of others.

Jim, I’m sorry I didn’t ask more questions. I’m sorry I didn’t let you know what a joy it was watching you interact with your family. Thank you for making me feel like such a part of it. Thanks for the grin and twinkle in your eye that said, “Yes, Michael, I got the joke you just made but, it’s only funny enough for a grin. Be funnier and I’ll laugh.”

My friend, know that you made a difference. Be proud of the legacy you’ve left. It is one of love, laughter, music, and motorcycles. It’s one of family and friends. It is one of a life ended too soon, but lived to the fullest. And if I’m right, and this whole thing is about enriching the lives of others, then well done. You had a positive effect on more people than I can count. Our lives are better for having known you. I promise to honor your memory by trying to have a positive impact on the lives of those around me.

And I will never again look at the ocean the same way. 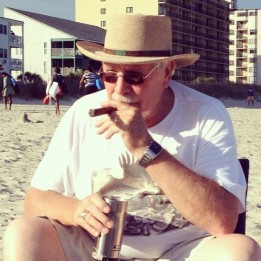