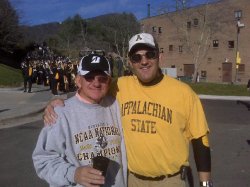 My buddy asked me to take a look at his Dad’s obituary before he submitted it to the paper. He wanted to know if there was anything he left out. Reading it I became painfully aware of how difficult it is to reduce someone’s life to 1100 characters that will fit in a 6 inch column. “He served his country during the Vietnam conflict while in the US Army.” Do you know how much that sentence omits? I’ve seen pictures and heard stories that let me know those few words could be expanded into a book.

As I read his obituary, I thought about my interactions with Jerry. His son, T.O., and I were college pals turned life-long friends. Jerry was always a part of our relationship. Whether, when visiting App State guys were sprawled across his den floor, he had to step over us to make a donut/biscuit run on a Saturday morning, or jerking a knot in us when we screwed up, or patiently and lovingly talking us through life’s obstacles we were encountering for the first time; he was a constant in our lives.

As I was reading about his life, reduced to one page, I was reminded of a part of our relationship I have never shared with his son. A piece of him that won’t fit in the newspaper’s tribute. A gift he gave me that I never thanked him for or repaid. Jerry taught me how to sell.

My first job out of college was peddling copiers for Lanier Worldwide. Jerry was a sales manager for a rival company. Sometimes I would run into him, out with his team after work, having a beer, and talking about their days. I would solicit advice from him. Even though his team was selling against me, he always helped me work through the sales roadblocks I encountered. One day, while driving home from work, I was thinking about a prospect I was trying to close. I saw Jerry’s car still at his office. I turned into his parking lot. I walked into his office and sat down. We had our usual banter and laughed a little, then got serious.

Mike D: “Juice, I’m having trouble closing a big one.” (I’m not sure why I called him “Juice”…I think I heard one of T.O.’s high school friends call him that and I liked it. Pretty sure it was Hambone. Crud, now I’m trying to remember why we call Timmy “Hambone.”)

Mike D: “I’ve tried everything. I Assumptive Closed. I Puppy Dogged them. I Ben Franklined them. I have Zig Ziglared the heck out of these people. I’m stuck.”

J.O.: “Do they like you? People buy from people they like. Quit trying to close them before they like you. Become friends with them. Show some interest in their company and their lives. But, it has to be sincere. You can’t fake it. There are some customers who buy based on price alone. Stay away from that group. Sell to people who like you and who you like. They will continue to buy from you and they’ll recommend your product to their friends.”

I know it’s Sales 101. But, I was so intent on learning all the technical skills that Tom Hopkins wrote about sales I somehow missed that important component.  J.O. was great at helping you get out of your own way.  That conversation changed the way I approached customers.  After that talk I made it a point to observe J.O. with others. He always asked questions. He showed a genuine interest in everyone he encountered. People loved him for that. And they bought from him. And they recommended him to their friends. He taught me how to sell.

The cool kids refer to my writing as T.L.D.R. Too Long, Didn’t Read. I’m at 700 words now and could go on for about a novel more talking about J.O., our adventures, and his impact on my journey through life.

I won’t, though. TLDR. I will wrap this up with the most important lesson Juice taught me: Enjoy life. J.O. approached everything he did with an unbridled passion. Whether it was rebuilding a car with his son or grandson, dancing with his wife, throwing a Christmas party for his friends, or giving advice to a struggling salesman; he gave everything he did everything he could give. It’s a cliché and we say it every time we lose someone unexpectedly. It’s a cliché because it’s true.

Yeah, Juice, I got them to like me. I closed them. Thanks for your help. I feel lucky and blessed that you liked me too. I’m a better salesman and person for having known you. Rest peacefully, my friend.

4 thoughts on “Thanks, Juice”